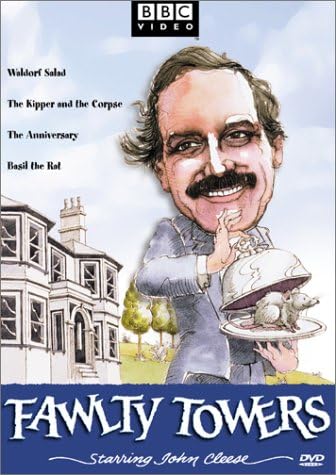 John Cleese has always maintained that Fawlty Towers was inspired by a real hotel that was run by a proprietor who treated guests as an inconvenience to running a business. No one in the world, however, can possibly match the sheer insolence and incompetence of Basil Fawlty, perhaps the most brazenly rude character in the history of customer disservice. In "Waldorf Salad," an American guest slips Basil good money to keep the cook late for an after-hours dinner, but Basil pockets the cash and attempts to deliver the meal himself in a calamitous comedy of errors. As he pretends to berate and beat the nonexistent cook for his mistakes, his manic bits of street theater grow into an absurdly schizophrenic shouting match. Only Basil Fawlty could keep up a conversation with a dead man and never even notice his state. In "The Kipper and the Corpse," Basil is sure that the man died from the hotel's bad food. When a doctor declares otherwise, he leaps into gloriously insensitive explosions of joy, but his problems are just beginning. Where to hide the body as they await the coroner while keeping the whole thing a secret from his customers? Just about everywhere, it turns out, and the room-hopping farce that ensues ensures that the dead man is the worst-kept secret in the hotel's hilarious history. Basil blithely pretends to have forgotten about "The Anniversary" as Sybil drops hint after hint to Basil's blank stares, but secretly he's plotted a surprise party. Unfortunately his act is too convincing and Sybil storms out before the event and Basil forces Polly to play the part of his wife, unexpectedly bedridden, for his puzzled guests. An even more puzzled Sybil returns to see the farce. Nothing turns Basil Fawlty's rude behavior into panicked fawning and manic desperation like a confrontation with authority, and the surprise arrival of the health inspector in "Basil the Rat" has him flip-flopping between penny-pinching opportunism and hysterical self-preservation. When Manuel's Siberian hamster, which turns out to be rat, escapes into the hotel, a poison-laced cut of veal set out to kill the creature becomes mixed up with the dinner cuts. When they fear the fatal flank has landed on the inspector's plate, they launch into an impromptu game of dining-room switcheroo. --Sean Axmaker

Check in to the most popular BBC comedy of all time, where merriment and madness are on the house. Newly remastered for better-than-ever viewing, this disc contains four classic episodes, as well as interviews, behind-the-scenes and cast bios. John Cleese stars as Basil Fawlty, the sharp-tongued, short-tempered owner of Fawlty Towers, a hotel plagued by crisis, chaos and bizarre characters.The Kipper and the Corpse: When a guest dies, Basil?s only concern is hiding the corpse-and the old kippers-from the other guests - but the body winds up everywhere. Waldorf Salad: An outspoken American guest demands a Waldorf Salad and a level of service quite unavailable at Fawlty Towers. The Anniversary: Sybil thinks Basil forgot their wedding anniversary again. Actually, he?s planned a surprise party but is left inventing excuses when she decides to play golf. Basil the Rat: Manuel insists his pet rat is a Siberian hamster. Basil knows the health inspector won?t agree and vows he?ll never set eyes on the rat-but the rat has other ideas.